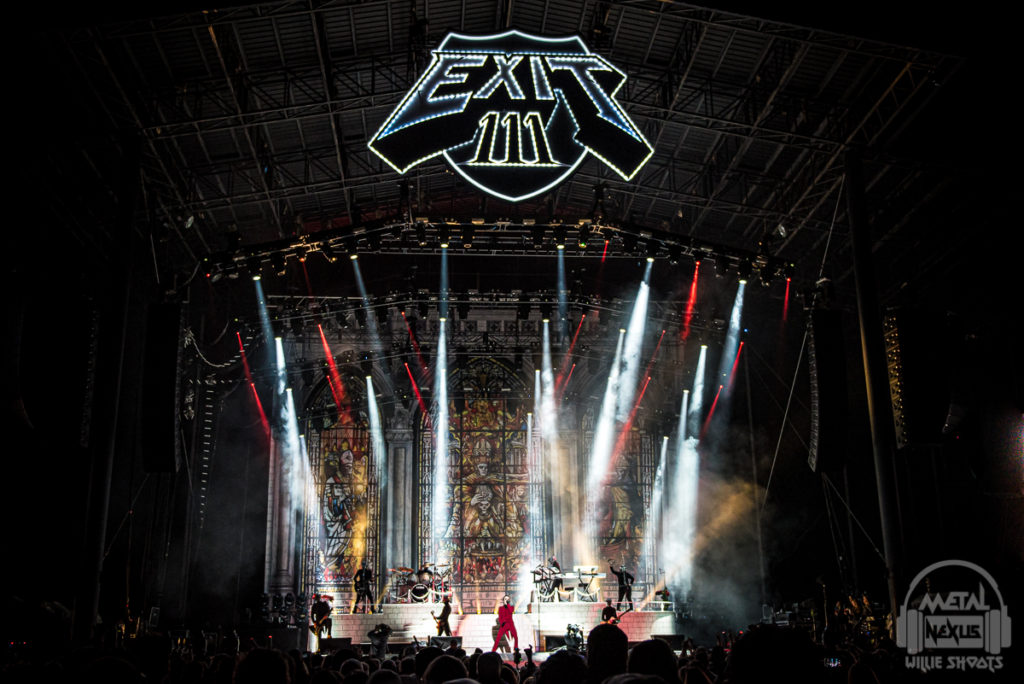 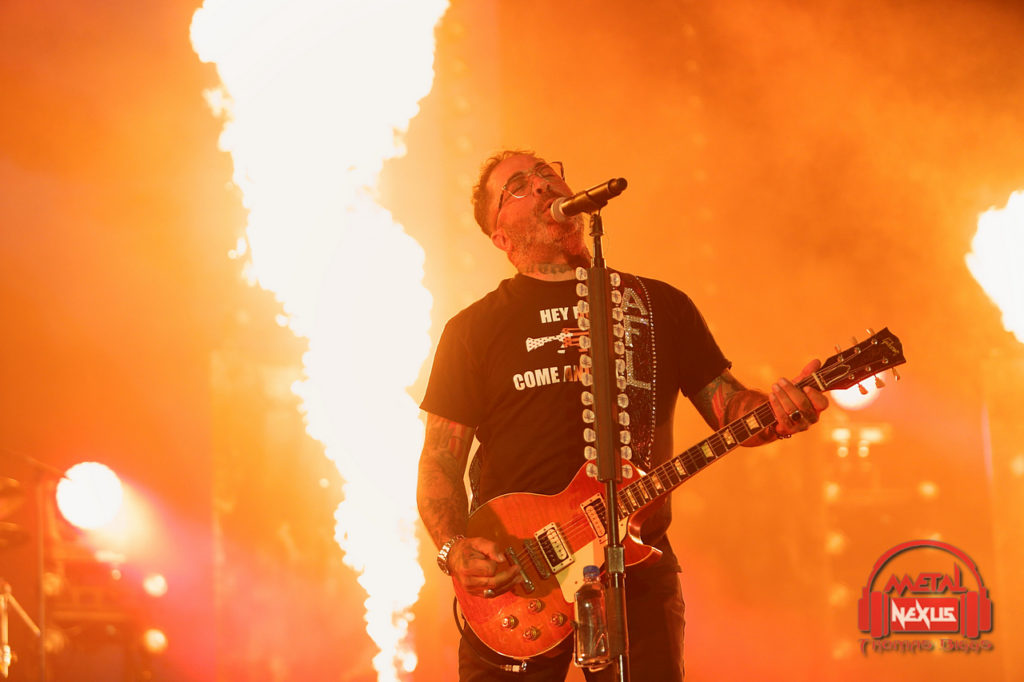 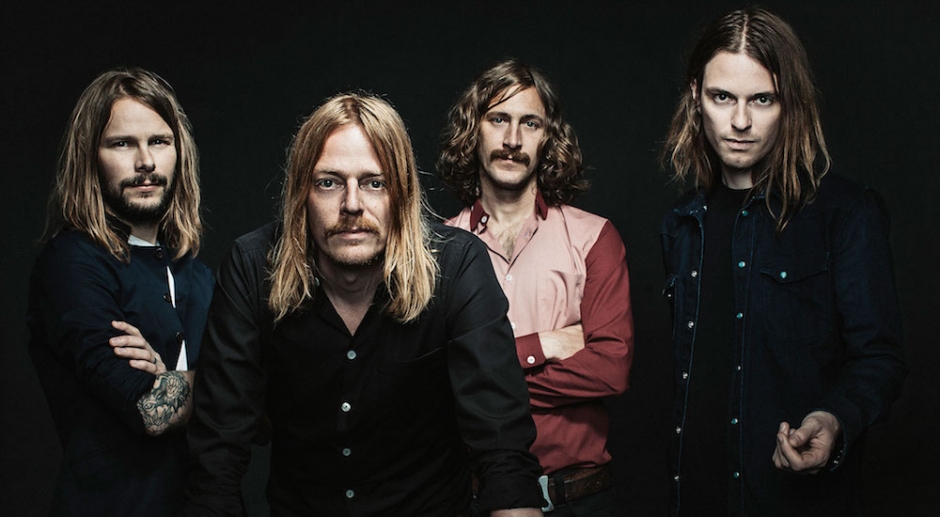 Welcome back to our ongoing series of LOUDER THAN LIFE 2019 artist profiles, our weekly guide through the lineup of acts who’ll take the stage at Louisville, Kentucky’s Highland Festival Grounds at Kentucky Expo Center September 27-29 in what’s sure to be one of the biggest concert events of the year. This week, we’re taking a closer look at Swedish neo-psych blues chooglers GRAVEYARD. 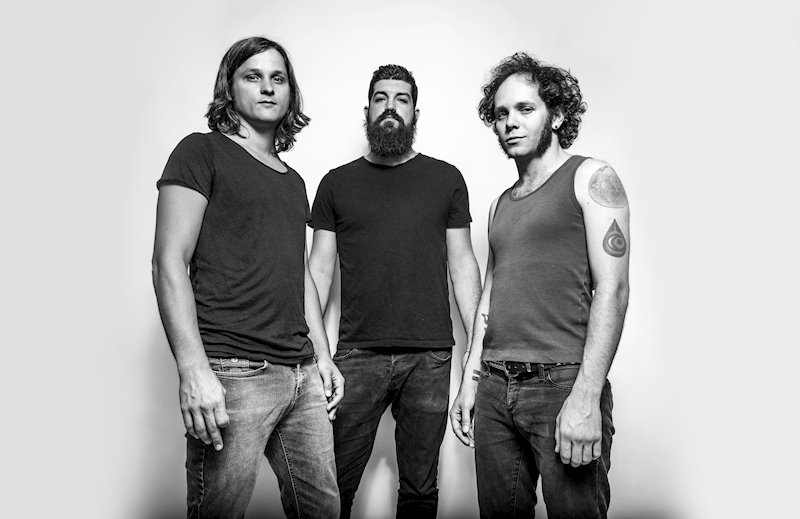 Doom three-piece Black Lung have returned with their new record, Ancients, via Ripple Music. Formed in Baltimore during the winter of 2014 by Adam Bufano and Elias Schutzman (founding members of The Flying Eyes) with multi-instrumentalist Dave Cavalier (Snakefeast). Creating a loud, effects-driven sound, they used their doom influences with touches of palatable melody. After the release of their self-titled album, they were named Best New Band by the Baltimore City Paper in 2015. In that same year, they went across the pond to Europe, playing Rockpalast Crossroads Festival (which was broadcast on German television), Freak Valley, and Desertfest Belgium. This is where they shared the stage with doomsters Graveyard, Dead Meadow, and All Them Witches. In 2016, they came back with a second full-release, See The Enemy, an album that put them on the map as a rising band. Now with more songs written, they went into the studio with Frank “The Punisher” Marchand (The Obsessed, Borracho) and came out with a sharper tuned-up sound.

Right off the bat, I am glad that they did not use distorted vocals on this album. Although I do enjoy distorted reverb vocals from stoner rock/metal and alternative artists occasionally, I think it can limit the songs. Dave Cavalier does great vocal work on this album, without making it sound like they are playing in a tin can. It feels cleaner, and it’s refreshing. That’s not to say I don’t love the guitar tone created by effects for this album. “Mother of the Sun” was an inviting first track with an intro that acts almost as an introductory track, without becoming too exhausting. The title track is really groovy and has a partnership between riff and chorus that will get in your head (in a good way, not a Bachman-Turner Overdrive kind of way). “Gone” is a fun track that has solos woven in and out of it, blended with another catchy riff. The album slows down with the heavier tone of “Badlands”, a song that radiates a Spaghetti Western aesthetic. Just when you think the track is ending, it pans out into an atmospheric jam. This album is a nice turn for Black Lung, making their sound a little more accessible without still being very heavy in the right places. I would recommend this to any hard rock fan who was looking for something heavier, as a stepping stone even heavier music.

Ancients will be released March 8 via Ripple Music (North America, Asia, and Australia) and March 22 on Noisolution (the UK and Europe). To preorder the album go here, and follow Black Lung on Facebook and Bandcamp. 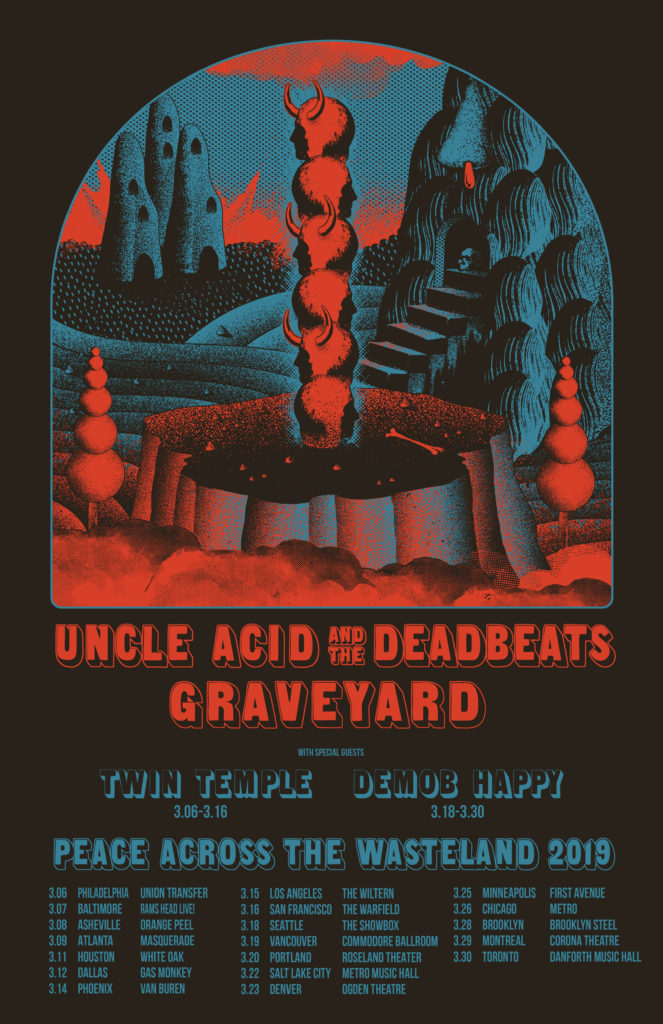 Stoner rock fans across North America will have reason to rejoice in March 2019, when English horror-psych mavens Uncle Acid and the Deadbeats join forces with Swedish retro-rockers Graveyard for a co-headlining jaunt dubbed the “Peace Across the Wasteland” tour. Ticket pre-sales for the nineteen-date tour, which kicks off at Philadelphia’s Union Transfer on March 6 and runs through March 30 at the Danforth Music Hall in Toronto, begin October 24, with the general on-sale beginning two days later.

From the ashes of Swedish Doom / Stoner band NORRSKEN rose two new bands. Whilst some of the band formed  WITCHCRAFT, the rest formed the classic retro-modern GRAVEYARD.  They strode into the spotlight with a steely stare and a sense of purpose.

After forming, the band were swift to record a two track demo and played a total of three shows, before planning for a full-length album. Their self-titled debut album was recorded by Don Ahlsterberg and released in early 2008. On the recording sessions’ completion, Truls Mörck was replaced by guitarist Jonatan Ramm.

GRAVEYARD then toured with label mates WITCH. In the fall of 2008, they also toured with CLUTCH. In 2009, they toured with the rock band CKY and released their second album in spring of 2011.  Touring followed, with the likes of SOUNDGARDEN.  However, bass player and co-founder Rikard Edlund then left the band to “pursue other musical ventures“.  In September 2015, the band released the ‘Innocence & Decadence’ record through Nuclear Blast. 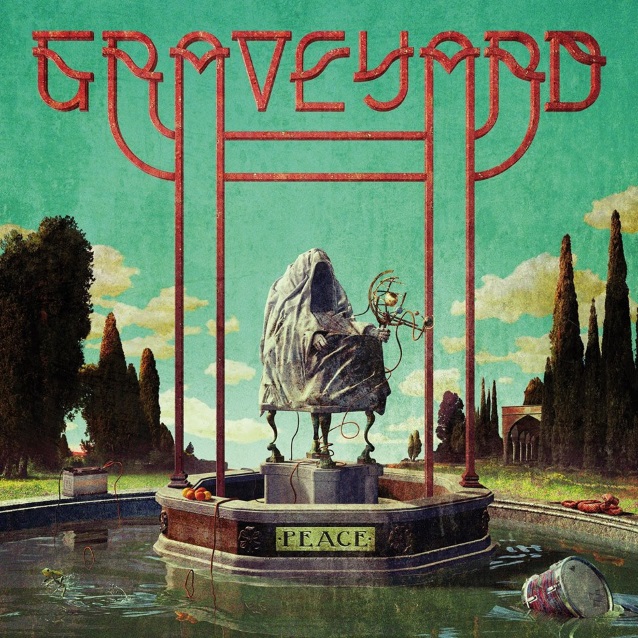 The album ‘Peace’ is the reunion tentpole.  It was produced by Chips Kiesbye and is released via Nuclear Blast.  It combined elements of Stoner/Doom, but with many more references to 60’s and 70’s artists.  The warm, yet somewhat retro production, gives it a sound that is very welcome in the cold age of digital perfection.

The songs shift around your consciousness and I have generally been impressed by the thoughtfulness of songs such as “Walk On” and “Del Manic”.  The sound is propelled by guitarist/vocalist Joakim Nilsson’s fantastically rich vocals and the jazzy content on some songs makes this record a genuine treat to fall into.  Like a feather coated beartrap – you initially feel comfortable until the teeth chomp on your leg.

There is a feeling of a band genuinely understanding the pulls of the musical universe and who are acutely aware of their place in the patheon of chaos.  They seem to be stretching out on an aural adventure in an effort to put distance between them and their somewhat tumultous past.  However, it is a solid album with great tunes such as “A Sign Of Peace” and the opener “It Ain’t Over Yet”.

If your bag is thoughtful, grooving Stoner rock with a warm retro feel, then GRAVEYARD is a band for you to check out. 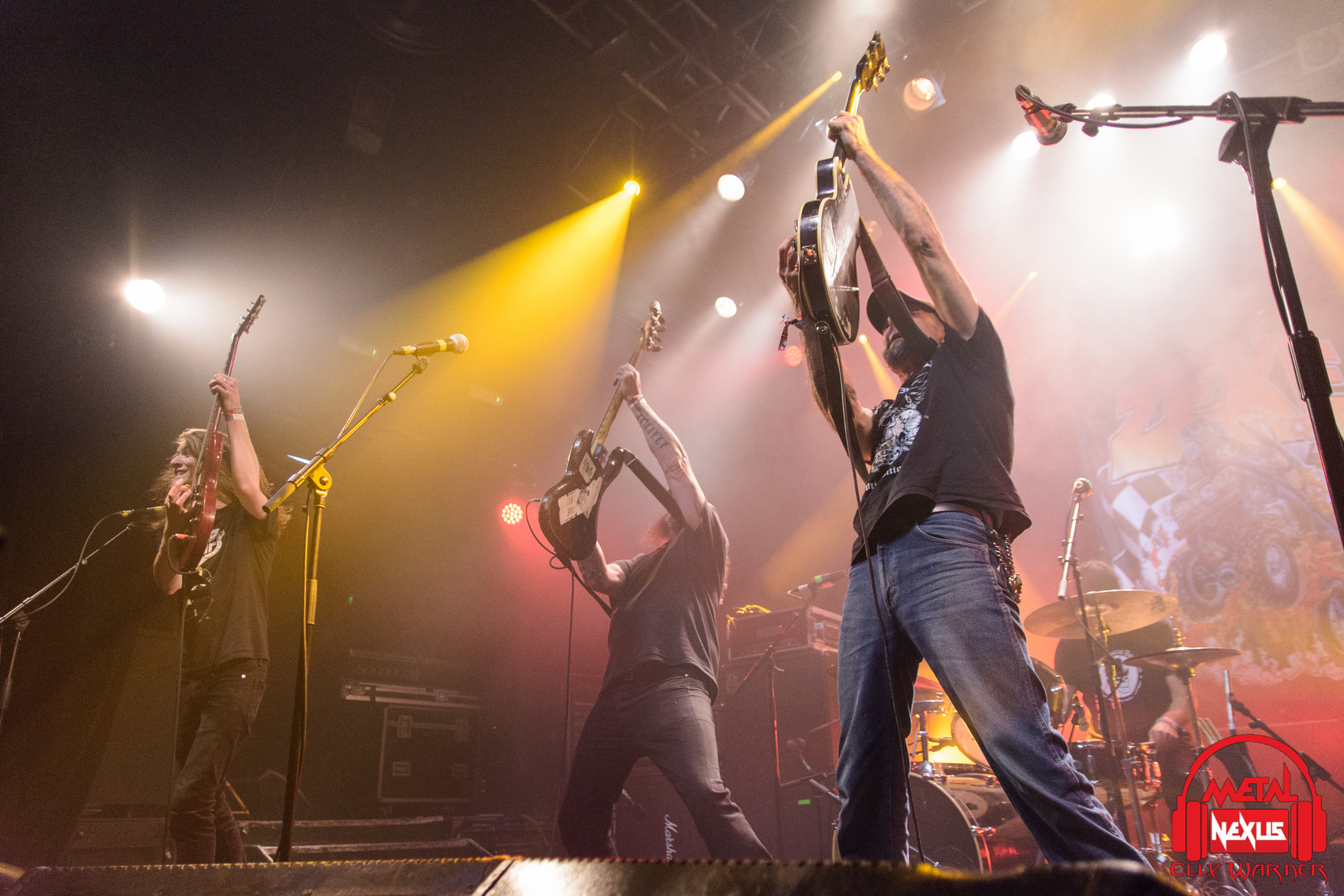 The UKs very own version of Roadburn took over London over the bank holiday weekend of 4th May – 6th May. The annual 3-day DesertFest London festival hosted over 70 bands including some of the biggest names in the stoner rock scene, at the most iconic venues in Londons Camden town – from the Roundhouse to Koko, The Underworld, The Black Heart and The Dev(onshire Arms). Camden was a hive for worshipers of the scene to congregate for the 7th edition of this fundamental tour, and with headliners that included Graveyard, Napalm Death, High On Fire, Hawkwind and Monster Magnet, this year has been it’s biggest and most diverse yet!

Today saw the festival at it’s busiest for its opening day, with 26 artists across 5 stages, not to mention the thousands of tourists bustling about Camden town – famous for its vast array of boutique and quirky independent shops, amazing street food, and markets, weird and wonderful street performers and musicians, as well as being the absolute hot-spot for all kinds of sub-cultures to thrive. With the distinct smell of weed fresh in the air on a blisteringly hot day in the capital, I was ready for the beginning of what would be an epic weekend of (natural) highs from the outstanding line-up at DesertFest London 2018. (Full gallery follows article). Continue reading → 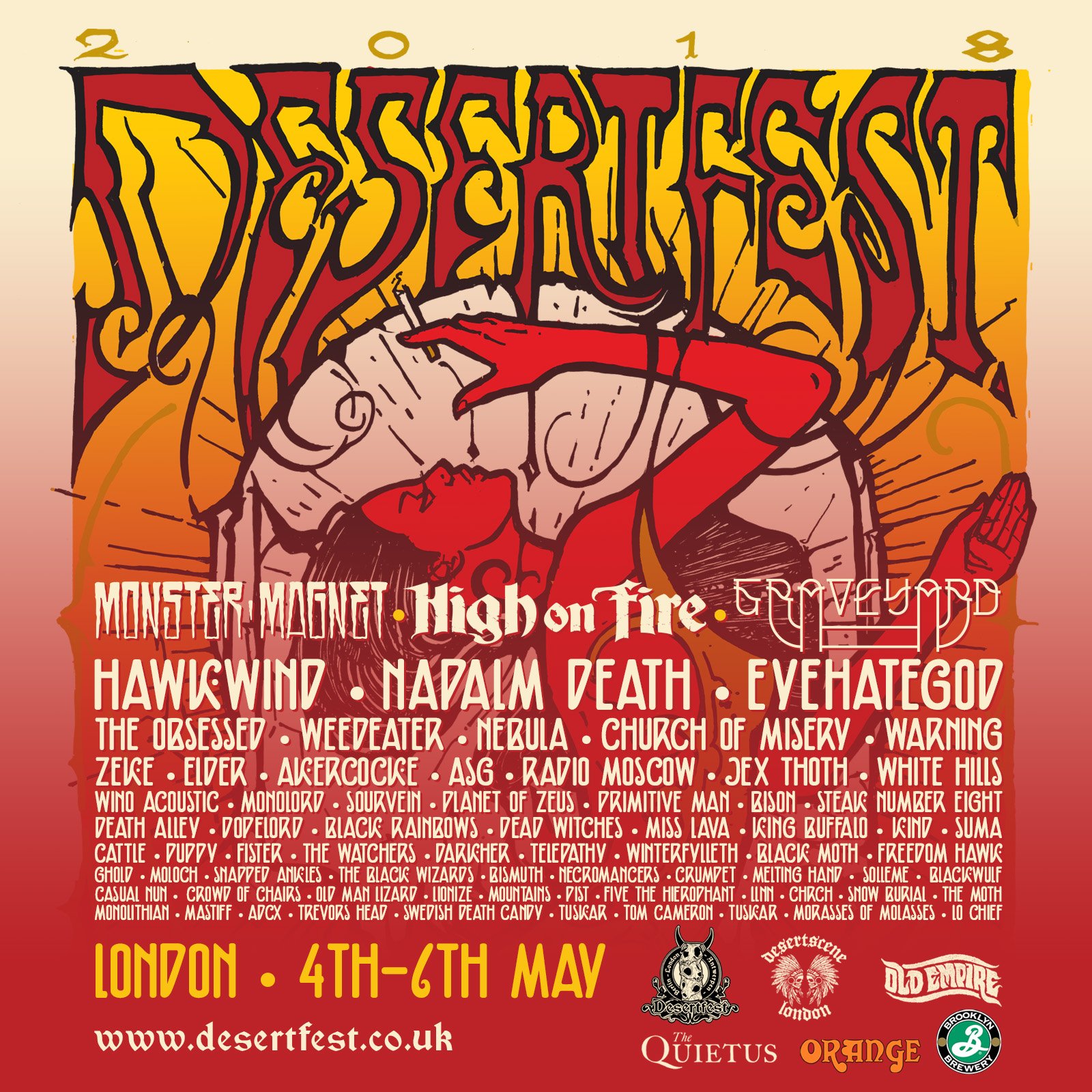 The UK’s premier independent festival Desertfest London returns over the May bank holiday (May 4th-6th) with what can only be described, as unquestionably it’s most biggest and broadest line-up yet!

Now in its 7th year, the festivities will take place across multiple venues in London’s Camden Town including the famous Underworld and breathtaking Roundhouse. With over 70 acts announced across the whole metal spectrum, together with the biggest names in sludge, doom and psych!

Not only that, as par tradition Desertfest will be holding their annual pre-festival party at The Black Heart on May 3rd featuring a full headline set by North Carolina’s A.S.G and London’s own Flash House as support! (Pre-festival tickets here)

Read below for full headliners and bands that are not to be missed! (Full weekend line-up follows article. Weekend and day tickets available here). Continue reading → 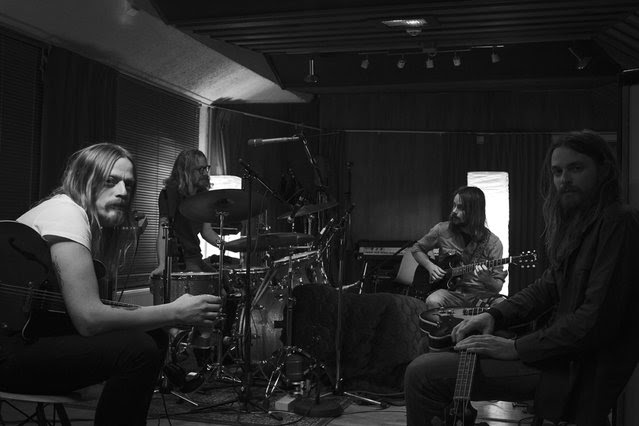 Classic rockers GRAVEYARD have entered Park Studios in Stockholm to record their yet untitled album that is scheduled for release late spring/early summer in 2018. The album is produced by Chips Kiesbye (THE HELLACOPTERS, MICHAEL MONROE, THE NOMADS) and engineered by Stefan Boman (BURT BACHARACH, ALICE COOPER, DEF LEPPARD & KENT to name a few).