Stockholm, Sweden has always been home to an amazing array of bands over the years and standing out in the crowd there has become increasingly hard. Sideburn is one of those standouts, and has been since Morgan Zocek helped form the band in 1997. The style they play brings you back to that old school classic rock sound with some blues and a pinch of doom. The new album “Evil or Divine” does not disappoint. Released May 22, 2015 it has become a favorite of ours and often does not leave the playlist or cd player. The opening track “Masters and Slaves” starts out the album with some amazing retro guitar work and eases you into the vocal style of singer and guitarist Dimitri Keiski. . Guitar solos by founding member Morgan Zocek seem like they are never going to end. The guitars are just the beginning of the unblemished musical perfection that they bring to this album. The next track is where Dimitri really brings out his full potential and range in “Sea of Sins” hits both highs and lows and takes the listener on this musical journey. The crashing of the cymbals and beat of the drums by Fredrik Haake clears a path for everything else to chime in. Musically Sideburn has an amazing progressive style with various hints of other genres, and when you add the vocals it just brings in that retro feel that fits perfectly like an old pair of pants. With a song title like “The Day the Sun Died” you know that it will summon the darkness and doom that lives inside a black heart. Things are slowed down and everything hangs on each note. The deep tone of the bass riffs by Martin Karlsson bellow out and help steer the song in the right direction. The chorus comes through like a flawless symphony of sounds, and lurks around from the ear to the tip of your tongue and has you singing along. The album is the soundtrack to the journey it takes you through while listening. The sound Sideburn has is not watered down, and needs to be consumed by all. 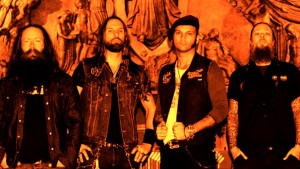