Art, food, wine, the Eiffel Tower and maybe a few other things are what commonly come to mind when thinking of Paris, France. Abrahma is one of the great products of France and should be added to that list as well. The impeccable music they create will not escape you. Flawless and well orchestrated throughout, it’s like a maze made perfectly for the ear. From the city of love is where they reside, however the darkness truly comes out with their retro doom sounding music. They have released one of the best through and through albums I have heard this year in “Reflections In the Bowels of a Bird”. Released in May the album starts with “Fountains of Vengeance” and has that fuzzy wah wah sound that in a way sets the tone for the entire album. The intensity changes several times really keeping you on your toes. By the time the second song comes on you are really ready for anything. “An Offspring To The Wolves” has that amazing doom sound. This is the first single on the album in which they have also released a video as well. Not only is this album amazing in sound but the album art is also vibrant and is likely to stand out on any record store shelf. The vocal style changes somewhat throughout the album, not drastically but just enough to make every song sound refreshing. At times vocalist Seb Bismuth sounds like an early era Brandon Boyd from Incubus. Track 3 “Omens Pt. 1” starts a 3 part series of songs on the album. Some of the guitar work really casts out a Sabbath like sound. The music seems just perfectly melded together and then the vocals are the final touch to it. It’s so well orchestrated that each chord seems perfectly timed. The song winds down to such a somber drawn out ending that leads greatly into the next song. “Weary Statues” starts out with some drone like sounds and then gets into the drum beat at which point it’s off to the races. This song sets a fast pace and is my favorite track on the album. It has a mean chug along guitar and vocal sound that lead into this surprising melodic portion of the song and then right back to up tempo. I won’t give the rest of the album away but it is the type of album that will stand the test of time. It is 52 minutes of 70’s inspired bluesy doom rock that will keep you listening til the last second. 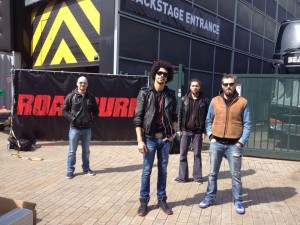