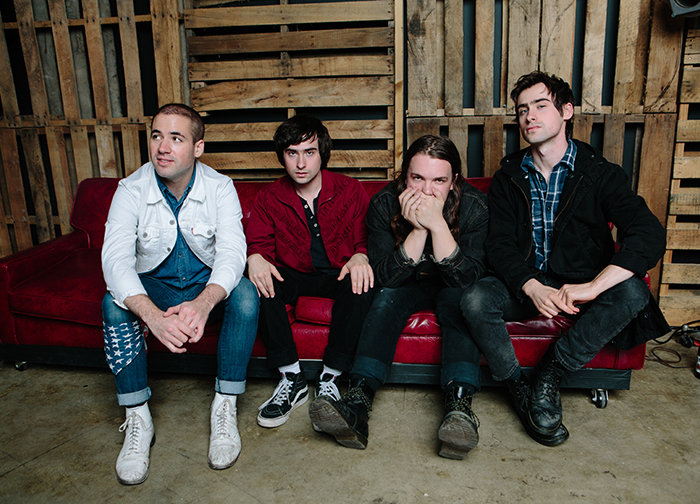 White Reaper will be one of the upcoming acts at this year’s Bourbon & Beyond festival. Bourbon & Beyond has a new home. It is still in Louisville, Kentucky of course, but will call a new festival grounds home. This year, Bourbon & Beyond will take place at the Highland Festival Grounds at the Kentucky Expo. The previous location, Champions Park, had a terrible flood last year and day 2 of Bourbon & Beyond was cancelled. However, to make up for that, Bourbon and Beyond is now a 3-day festival. This means an additional day of bands, bourbon and best friends! How awesome is that? This will be White Reaper’s debut at the Bourbon & Beyond Festival. If you have never heard this band before, prepared to be amazed! With that said, let’s discuss White Reaper.

White Reaper is a garage punk band from Louisville, Kentucky. So, get ready for this hometown band to tear down Bourbon & Beyond! Their punkish style sound and catchy beats has an energetic vibe that compels you to get up and move and dance around. This is one act you do not want to miss on this bill! There is so much talent with the team of Tony Esposito on guitar and vocals, Hunter Thompson shredding on guitar, Ryan Hater on the keyboard, Sam Wilkerson bringing the groove on bass and Nick Wilkerson behind the drum kit. White Reaper formed around 2014 and not long after, their first studio album “White Reaper Does It Again” (2015) was released. The band has also completed a new album titled “You Deserve Love” which is slated for release on October 18th, 2019 via Elektra Records. The band has already released three of the 10 tracks from the new album which includes “1F,” “Might Be Right,” and “Real Long Time.” Of the new singles the one that stood out most to me was “Real Long Time.” White Reaper really packed a punch in the intro and it immediately captured my attention. The melody on the track seemed so familiar, it was like deja vu, but where had I heard this before? I kept thinking and 30 seconds later it hit me. White Reaper incorporate a killer Thin Lizzy flavor in this song! You can really pick up on the duel guitar solo introduction by Tony and Hunter. It’s so rich and heartwarming to hear such a melodic sound come from these young gentlemen. The spirit of Thin Lizzy guitarists Scott Gorham and Brian Robertson was felt in this song like a bolt of lightning striking down! So, be sure to not miss White Reaper Sunday, September 22nd. You will leave a fan, no questions asked. You can still pick up tickets to see this hometown band along with all the other talents artists which include Robert Plant, ZZ Top, Foo Fighters, Live and many more. Pick up your tickets here.