In February, one of the many amazing summer tours was announced. In an odd, but somehow fitting bill, Coheed and Cambria, Mastodon, and Every Time I Die team up for an epic summer run from the end of May to the beginning of July. To add to the already epic show, it was revealed that Mastodon would be performing their groundbreaking album ‘Crack The Skye’ in its entirety. Getting to see one of the most monumental albums of the 21st century performed in full made the ticket more than worth the price. On top of that, we got treated to a career spanning set by Coheed and Cambria and were witnesses to the insanity that is Every Time I Die. We were fortunate enough to cover the Chicago date on the tour at Huntington Bank Pavilion at Northerly Island. Please check out our review of the shows along with our photos of Coheed and Cambria and Mastodon.

Every Time I Die has always been one of my favorite bands to see live. The energy that they bring to the stage is intoxicating. Their crowds are consistently insane as their diehard fans come out to support wherever and whenever they play. As they took the stage to “Roman Holiday”, the pit got started immediately as bodies rushed to the front when the music started. Vocalist Keith Buckley made sure that the crowd knew that Chicago has always been one of their favorite cities to play in. This is normally cliche but they always make sure to say it at every venue they play in the city. Despite only having a forty minute set, the band was able to get in twelve songs (more than Mastodon and almost as many as Coheed). The crowd never stopped moving throughout the set and showed why Chicago is a great city for the Buffalo, NY quintet. It is impossible to not move your body when the band is playing material like “We’rewolf”, “Underwater Bimbos From Outer Space”, and “Decayin’ With The Boys”. As the band closed their set with “Map Change”, guitarist Jordan Buckley came out to greet the crowd and surfed over the top of several people. The band didn’t disappoint and got the crowd heated up for an amazing evening of music. Due to complications with the venue at the start of the show, we were unable to photograph Every Time I Die.

Mastodon has been praised for years as one of the most talented bands in the metal genre. About ten years ago, they released what many hail as their magnum opus with ‘Crack The Skye’. While that’s debatable, there is no doubt that it’s one of the best metal albums to be released in the last 15 years. The depth, structure, and complexity is nothing short of astounding. I was too young at the time the album dropped to know the band so this was a great opportunity to get to see them play it live like they did when it was first released. Whether it’s your favorite album from them or not, you should be as stoked as I was to get to experience the album in its entirety live. From start to beginning, the band was mind-blowingly good. Vocals, guitar, bass, and drums were all on point. Many people have said that Mastodon‘s weak point live was their vocal ability while playing their instrument. That wasn’t the case on this tour as each member executed their verses flawlessly. Guitarist Brent Hinds sounded especially good on his lines for “Oblivion” and “The Last Baron”. Hinds and Bill Kelliher are two of the most talented guitarists in the world and they show that throughout this performance. The solos and riff trade offs between the two are very entertaining to watch. The switching of guitar tone on “Quintessence” into the “Let It Go” part of the song is blissful to experience live. Unfortunately, Scott Kelly couldn’t be there to deliver his lines for the album title track but bassist Troy Sanders delivered them just as powerfully. “The Czar” and “The Last Baron” were my favorite songs of the album performance with the long instrumental sections and crazy visuals provided on the screen. Visuals were made specifically for the album and filled out the rest of the stage nicely with these awesome videos to back the awesome music. The performance of the album shows why Mastodon has reigned at the top of the genre for so long and continues to do so. It took me a long time to click with their music, but ever since, I’ve became a huge fan of what they do.

After finishing up ‘Crack The Skye’, the band also had time to give the fans a few extra songs. The band was able to be a bit more mobile during these as the songs weren’t as complex as the material from the album. The band kept the fire going and launched straight into “Blood and Thunder” after finishing the album performance. The crowd went insane and erupted into a battlefield after being mostly stationary throughout the album performance. I couldn’t believe how much heavier it sounded live compared to on record. It was great seeing the band up there having the time of their lives as the fans belted out “White, Whale! Holy, Grail!” The band then played “Crystal Skull” from ‘Blood Mountain’ (my personal favorite Mastodon album). Following that, they went full blown heavy and decimated the pavilion with “Mother Puncher”. Troy Sanders still sounds brutal as ever when executing the blood curdling vocals from their debut album. I couldn’t believe how easy he made it look performing a song they recorded 17 years ago while sounding nearly identical to the recording. It just shows you that Mastodon doesn’t age but only progresses musically. The band closed their set with “Steambreather” from their most recent album ‘Emperor of Sand’. Drummer Brann Dailor takes the charge vocally for most of the song. I’ve always had a huge amount of respect for drummers that are able to sing at the same time but I would say that Brann is at the top of the game when it comes to doing so. He’s already one of the best drummers out there but when you add vocals in it sets him apart from everyone else out there. The band is truly supergroup and has marked their claim as one of the best metal bands ever. At the end of the set, they promised to deliver a new album next year. Make sure you check it out and get out to a show to see these guys.

As Coheed and Cambria took the stage, the Windy City truly lived up to its name with a chilly, rainy night down by the river. In fact, the banner drop that typically has happened at the beginning of their set didn’t occur in Chicago. If I had to guess, it was because of the high winds at the start of the show. It was really cold with the rain, but fans stuck it out and enjoyed an epic set from the band. Another plus of the wind was getting to see the hair of Claudio Sanchez flow a little extra. The intro track “Prologue” leading into the 9 minute “The Dark Sentencer” was bone chilling. Coheed fans pick up on lyrics fast, singing along with the track as it if has been out for many years. One of the strangest things about the set was seeing vocalist/guitarist Claudio Sanchez without a guitar on stage for “Unheavenly Creatures” and “Old Flames”. Instead, the guitar tech took over guitar duty as Sanchez moved around the stage more to interact with the crowd. As always, the fans provided amazing interaction for the chants during “In Keeping Secrets of Silent Earth: 3” along with screaming the legendary lyrics “Man your own jackhammer!” The band kept the IKSSE material rolling by leading right into “A Favor House Atlantic”. You can always see that Coheed and Cambria fans have been in it for the long run as songs like these are among the loudest songs sung by the audience.

For me, the biggest highlights were getting to hear “The Gutter” and “Gravity’s Union” live. I’ll never grow tired of getting to hearing thousands of people screaming to call your mother during “The Gutter”. “Gravity’s Union” is truly one of their best and most intense live songs. The band sounded at their best on this track as they (along with the crowd) delivered all their emotion into the climax of the song. To me, it is one of Coheed‘s definitive songs in their discography and would be one of the first songs I would show someone trying to get into the band. I was also pleasantly surprised by how good “True Ugly” sounded live. I haven’t got to listen to ‘The Unheavenly Creatures’ much since the release but this is a song I’ve been playing a lot since I left the show. Seeing it live gave me a new perspective on it and I dig it a lot more now as a result. The band also threw in some material from ‘No World For Tomorrow’ like the title track and ‘Mother Superior’. It was great to see this material make it into the set as I’m really looking forward to getting to hear more from the album on the next Neverender tour. After closing the regular set with “Old Flames”, the band returned to the stage for two more songs. Seeing “The Pavilion” performed live in a pavilion was the perfect setting. As usual, the band brought their set to a close with the world famous “Welcome Home”. It never gets old seeing the double neck guitar come out as Sanchez and Travis Stever trade off on incredible guitar solos. Coheed and Cambria never disappoint live and the Chicago show was no exception. They always sound phenomenal and bring their A-Game every time. There’s a reason that their fan base is so die hard and continue to come out in droves to see them every tour. You can check out our photo gallery of Coheed and Cambria and Mastodon below.

This tour package may have seemed odd when announced but lived up to the hype that I had for it. It was truly a dream tour for me and exceeded all expectations with three phenomenal performances from three of my favorite bands. I know it’s typical to say that you shouldn’t miss a tour, but you 100% can’t miss this show. Check out the dates below on the poster and get out there if you can. Make sure to follow us for more content on these bands along with other rock and metal artists. 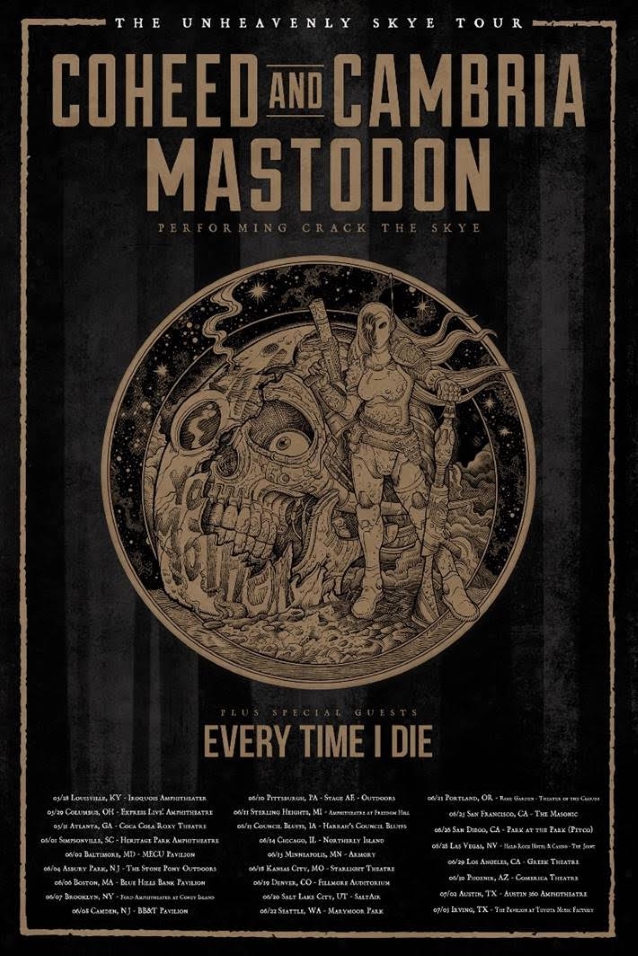